I’ve done a summary post of the books I read, places I visited, etc., for the last couple of years. 2020 has very little to recommend for itself looking back. The early months were pretty good, but later not so much.

I finished 33 books. The highlights were Megan Whalen Turner’s The Return of the King and Ben Aaronovitch’s False Value. There are two former autobuy authors who finally tipped over the edge for me to not even being library borrows, and a lot of ~meh~ mixed in. I tried a couple of self-published works from writers I’ve found via fandom(s); sometimes the original fic works for me and sometimes not, which is perhaps a function of the canon and backstory in fandom that requires more work to establish in original fiction. I’ve been letting myself read Obama’s memoir in bits and pieces, as a comfort, so I started in 2020 but it will finish as a 2021 read. (It’ll be a highlight, I’m pretty sure.)

Filed under miscellanea, movies, Out and about, Read or seen, travel, Uncategorized

Tagged as all about me, blah blah blah, miscellanea, tbr

Not sure I want this long term, relative to actual office set up. But this was easy to set up for a non-tech person. 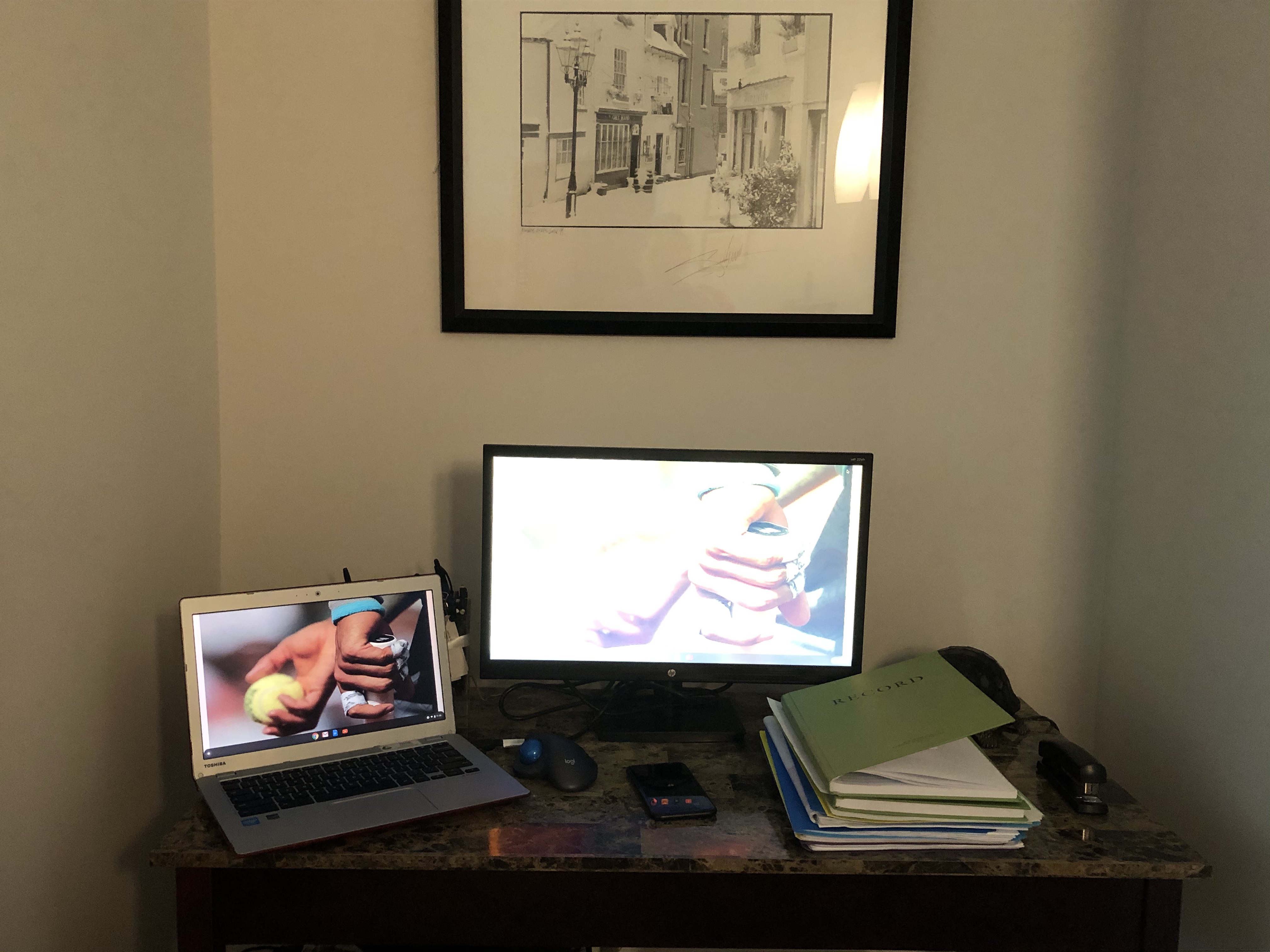 I am not mentally equipped for long term telework or self-quarantine. After two days I am stir crazy. I miss my two monitors. And my routine. And talking to people in person. I hate webex meetings.

Get off my lawn

I feel increasingly tired and cranky about women’s hockey and how it is covered and how people who do not watch regularly talk about it.

First, we get it:  fans, mostly men, who don’t watch women’s hockey think it isn’t good enough or fast enough and that the lack of hitting and fighting is a drawback.  (Uh, type usa canada women 2013 into your search bar and look what comes up.  I like that there is less hitting and fighting and more actual game play, but tastes vary.)  And you tell us that at every opportunity.  Frankly, we are aware that you think that way, and yours isn’t the interest we are seeking.  Go watch Don Cherry re-runs.  Women’s hockey is not a carbon copy of men’s hockey, and complaining because it isn’t is a waste of time and breath.

On that same note, please stop saying that the women want a hand out and don’t deserve it.  The NHL and its predecessors were money losers for decades.  You know who gave them money?  Tax payers did.  (Link via David Berri.) So stop saying women are asking for special treatment; they are asking for equal treatment, the same hand out that the NHL got.

Second:  the mainstream* coverage of the PWHPA lacks any sort criticism; nothing they say is interrogated in a meaningful way.  The loudest PWHPA speakers have been racist jerks; former players with axes to grind; and current national team players who come across as petty grudge-holders.  HockeyNight’s coverage last night included blatantly inaccurate statements about the NWHL, and framed the PWHPA as a union (which it is not) engaged in a boycott (which this is also not).

*They are happy to talk to big men’s hockey outlets and national reporters who don’t actually know the nitty gritty of woho, but based on the woho media I follow, they ignore pretty much everyone else and fail to provide even basic press information.  (That was a criticism of the NWHL early on too, but they learned from it and are much improved.  People forget that the league is five years old.  That’s an infant in professional sports league terms.)

Third:  the big voices on social media for the PWHPA may be standing up for national team players, but it isn’t really clear to me as an observer that they are doing shit for the lower tier players…who are getting a change to play in the NWHL since there is space now.

As a fan, would I love for professional women’s hockey to pay a living wage?  Yes.  Would I buy tickets, merch, pay to stream games?  Yes.  The PWHPA has not made any of these opportunities available to me.  You know who has?  The NWHL.  So I’m going to continue buying tickets and merch and streaming the NWHL games (which are free on Twitch).  And I’m going to continue to side eye everyone who claims that there is no women’s hockey league in North America.  There is; it’s just not the one players claiming they wanted #OneLeague actually wanted to survive the CWHL/NWHL competition.

The PWHPA seems to be hoping the NWHL will just go away (or be put out of business by the NHL), which is kind of pathetic and short-sighted, IMO.  Boston and Minnesota have sold out their games this season; the league has added another investor and multiple sponsors; they are sharing revenue with players.  It also seems naive to me:  why do you think a women’s league operated by Bettman et al. would be good for women?  Do you think they’ll handle CTE differently for women?  Do you think they’ll release players for the Olympics or Nationals?  That seems unlikely.

Tagged as hockey is a life ruiner, rant, sports

I had not paid any attention to the publication of American Dirt. I saw it described as a modern day Grapes of Wrath and was kind of meh. I mean, I read the Joads’ story in high school. The cover’s birds and barb wire made me think of farming. (I grew up in a rural pocket on the east coast’s midatlantic region: barb wire fencing was as common as electric fencing.). Learning that the book is a Latinx narrative about immigration written by a white person for a huge advance? Uh, nope. How did no one from the writer to the editor to the publisher to the art department to anyone even tangentially involved not ask even once, is this a good idea? 😬

I’ve never gotten the appeal of fruitcake. Even Carla Kelly’s Regencies with their Christmas pudding never sold me. But today I saw the biggest fruitcake I’ve ever seen at a café in Coimbra.

And when I walked past the same pasteleria on my way home after a day of tourist-ing, about 2/3 of it was gone.

Which makes me wonder if I’m missing something. Maybe for a coffee break tomorrow I’ll stop in and try it. Or one of the other amazing looking pastries.

Wibbling through a blizzard

The DC Metro region is expecting a blizzard. Right now, forecasts say 16 to 30 inches of snow with winds up to 40 mph. White out conditions through Sunday morning. Metro has already announced they are closing up Friday night for the weekend, which may be unprecedented in its history.

I have a (relatively pleasant) dilemma. I have tickets to Sunday’s Penguins-Capitals game. Games are almost never canceled. I’m not sure how this game will pan out since the Penguins have a Saturday home game and thus have to fly or drive to DC during the white out. Do I just chalk up the game/tickets as a loss, assuming it won’t be rescheduled, or stay in DC for the weekend for it?

It feels irresponsible to be away from home during a blizzard. But it’s not like I’ll be doing anything constructive there.

Also, keep in mind that several years ago I went to NYC for a weekend despite a blizzard. (It was fine. And fun.)

These are mostly life goals, because I’m resigned enough to the continued slump in reading that I can’t really make any really specific reading goals.

The Year in Reading

According to LibraryThing, I read or tried to read 42 books this year.  Scrolling through the list, a lot of the titles stir only the vaguest of recollections in my mind.

The ones that stand out as good (or very good) reads:

The Martian by Andy Weir.  As I mentioned on Twitter, I enjoyed this book even more than I enjoyed the movie.  The narrative style and the narrator’s voice *made* the book.

Penric’s Demon by Lois McMaster Bujold.  This is a novella set in her Chalion world, and it made me wish she would revisit it and tell stories based around the other Quintarian gods.  Loved it; it prompted re-listening to The Curse of Chalion and Paladin of Souls.

Sean Kennedy’s Tigers on the Run left me feeling ambivalent; I enjoyed it while I read it as revisiting favorite characters but I did not love the plot.  Simon came across as petty and unprofessional, which was discomfiting since he was the narrator.

Non-fiction books King of Russia and The Road Beneath My Feet, both memoirs, were pretty good as entertainment but were not necessarily sterling examples of the craft of writing.  I’d recommend them to hockey and music fans but not necessarily to the public at large.

On the oops side, glomming Susanna Kearsley was a mistake; some of the books are reissues and are not so good, and none of them stand up to reading in close succession.

I’m mostly broken up with Nora Roberts aka JD Robb.

Continuity is a thing

There is an author whose voice/style I really enjoy.  Or maybe it’s the voice she has given her main character?  In any case, I’ve kept up with the series through multiple books, even though pretty much every book has had very noticeable copy-editing blips and some continuity errors.  Despite being edited by a Big Name Editor.

A novella was self-published recently, and there are a couple of continuity/consistency things that just make me cringe.  Is it retconning?  I don’t know.  But I think I’m at my limit, especially now that the series has moved to hardback; I’m not willing to pay hardback prices for books that make my hands itch for a red pen.

Shuffling through a book-less desert
Blog at WordPress.com.
Loading Comments...